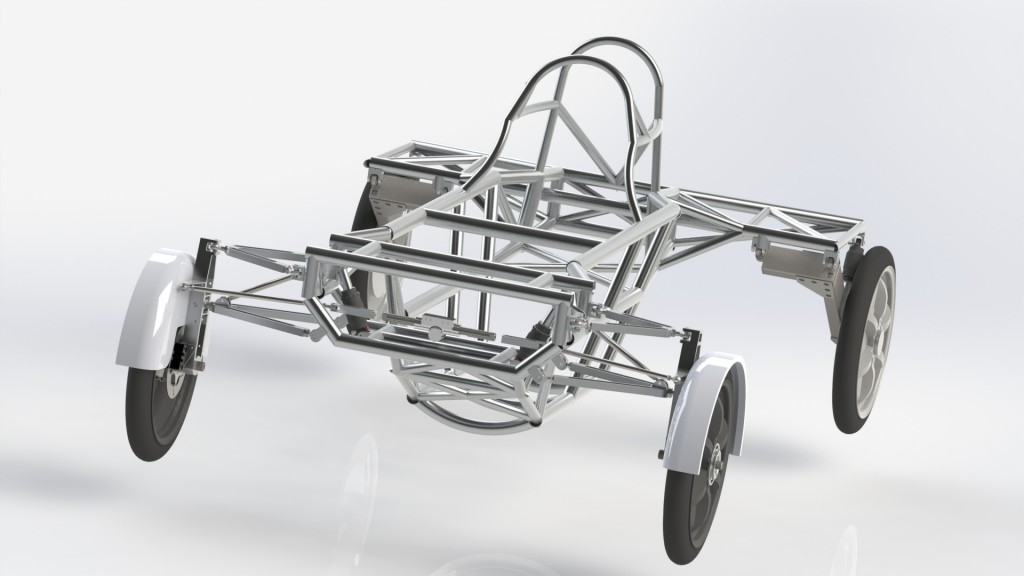 A render of the suspension and the chassis of Zephyr.

Recently, the suspension/chassis team has been working hard on finalizing the designs for the structural components of Zephyr. Because of the hard work of our team members, we have been able to shave over 55 lbs overall from the suspension and chassis! Most of these weight savings have come from changes in material and optimization in designs.

Our previous car, Impulse, had a steel chassis which weighed 52 lbs, but Zephyr will have an aluminum chassis – the SolidWorks model currently weighs in at just under 30 lbs. The front suspension of Impulse was made primarily out of 6061 aluminum, while Zephyr will have one made primarily of 7075 aluminum. Though 6061 aluminum is quite strong, 7075 aluminum is stronger than some types of steel! This allowed us to drop the weight of the front suspension from 60 lbs to 30 lbs. As for the rear suspension, Impulse had a single rear wheel, and its rear suspension weighed 20 lbs. While Zephyr has two wheels in its rear, the combined weight of its rear suspension members is just 17 lbs. Through being conscious about weight savings, our car is slated to weigh under 400 lbs now! A completed steering knuckle part for the front suspension (one of three).

Along with working towards finalizing designs, Brian Graf, Derek Chou, and Daniel Heywood have begun machining parts for the suspension in the past week. Several members of the suspension/chassis team are also in the process of getting machine shop training and aluminum welding experience such that we can increase our work rate, keeping us on track to a rolling suspension/chassis combo for Cal Day, April 20th, 2013! The amount of material we are able to mill out is a big factor in weight savings! One of the upper A-Arms of the suspension, waterjetted and ready to be finished. END_OF_DOCUMENT_TOKEN_TO_BE_REPLACED

Greetings! My name is Min Ju, and I’m the lead for the newly-created Solar subteam. Here is a sneak peak of what the Solar subteam and I have been up to. END_OF_DOCUMENT_TOKEN_TO_BE_REPLACED